Type in your account to login. Only foreigner, Korean login go 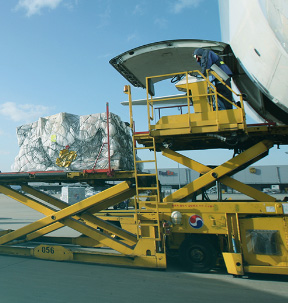 Since its opening in 2001, Incheon International Airport has continued its infrastructure and network development. In 2021, it became the world's second busiest global cargo hub that handles an average of 3.33 million tons annually, maintaining its status as a cargo hub of Northeast Asia.

Incheon International Airport is currently undergoing a four phase construction project. It plans to become a mega hub that can accommodate 106 million passengers, serve 600,000 flight operations, and handle 6.3 million tons of cargo annually. The fourth runway, a key facility in the four phase project, successfully opened on June 17, 2021. By 2024, the expansion project for Terminal 2 is expected to be completed, making the airport a world-class business center and Global Cargo Hub.

Incheon International Airport's perishable cargo is increasing to around 20% yearly, due to the onset of the COVID-19 pandemic and rising income level. To cope with the change of trends, the airport opened a Cool Cargo Center in the airside area in September 2021 to minimize transshipment time for biopharmaceuticals such as vaccines, fresh produce, and livestock guaranteeing optimal product conditions in any extreme weather.

Incheon International Airport's Free Trade Zone consists of the Cargo Terminal Area and Airport LogisPark, providing a more competitive environment for customers with convenient customs clearance, tariff benefits, and various incentive programs. In April 2005, 209.3 ha. was designated as a Free Trade Zone, and 92.2 ha. was expanded in December 2007 as the First Airport LogisPark. The 32.6 ha. Second Airport LogisPark was completed in April 2020 as part of the Free Trade Zone, as tenants were guaranteed exemption from local regulatory obligations for manufacturing, air cargo, and trade activities with low rents and suspended tax as benefits.

The Cargo Terminal Area and Airport LogisPark within the Free Trade Zone are connected by direct transport route, so there are no additional transportation procedures. High-value air cargo activities are made possible through simple processing, assembly, and consumption declaration, actively responding to the rapidly changing global business environment.

There are 38 cargo companies and two manufacturing companies at the Airport LogisPark, where the formerly plain export and import businesses are evolving into the handling of high-value shipments and/or multimodal cargo.

Incheon International Airport is leading the development and revitalization of infrastructures in airport-related industries, including tourism, air cargo, and aviation support. Not only has the airport become the center of global air cargo due to its Free Trade Zone it is continuing to expand its business horizons in aerial Maintenance, Repair and Operations (MRO) projects, travel businesses and other high-tech industries. As more business entities are gathering near the airport in the Air City, the collective economy will be growing into a representative economic bloc in Northeast Asia.

Driving sustainable growth in the industry ecosystem with ESG management

Incheon International Airport is pursuing innovative ESG management, including global eco-friendly efforts, social value creation, and transparency in corporate governance. The airport will become an innovative global enterprise that presents a transparent and fair corporate governance structure by implementing a low-carbon eco-friendly airport by 2040 by converting to 100% renewable power sources and minimizing environmental impact. As a socially responsible employer, the airport will be creating 120,000 new jobs, reaching zero in fault, accident, and hazard numbers. by 2030. In the meantime, the airport aims to achieve top grade in overall anti-corruption assessment and introduce a labor board director.

Incheon International Airport has declared a new vision for 2030 "We Connect Lives, Culture and the Future." Through this vision Incheon aspires to enter the future by breaking new grounds, setting new paradigms while creating new life values by connecting people – an ultimate value the airport is in pursuit of. Based on the nine new vision strategic tasks, including digitalized airport operation, it will achieve 1) Best ACI customer experience 2) 1st in energy independence of Northeast Asia 3) Zero accidents 4) Global No. 1 in Airport Throughput Units (ATU), and 5) Contribute 88 trillion Korean won to the national economy.

Direct any questions regarding information on the website to: